On each voyage, the ships would be ice-bound for several months and so Parry devised various entertainments and pastimes for the crew, and took a barrel-organ on board his ship. The musical repertoire consisted of some hymns and a good number of popular dance tunes, to which – we presume! – the crew would dance and help keep themselves fit. 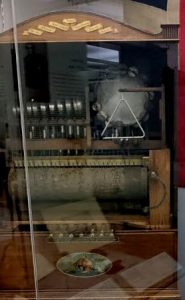 Some interesting info on this blogspot,  written by Regina Koellner and a photo borrowed from her until I get to take a better one myself!

I have been investigating the repertoire, including identifying un-named items,  sources for the musical items and dance figures.  This is a very early example of recorded dance music, and provides evidence into early 19th century taste in tunes complimentary to that discovered in the early manuscript books made by amateur musicians keen to learn new material.

One of the most interesting items is Miss Gayton’s Hornpipe which is still known within the folk fraternity, as both a tune and a solo stepdance routine, having been collected in Ayrshire in the 1950s by Tom & Joan Flett. It now seems likely that this tune and dance actually came from the early 19th century stage, from a ballet dancer who had an ‘annus mirabilis’ in 1808 before making an advantageous marriage and disappearing from the stage forever, aged only 17. Another strand of research is looking into the connection between the ballet dancer and the “traditional dances” collected a century later, which will be written up here.

A current research project … come back later for more info!

Another interesting aspect to ponder is whether any trace of this music can be found in the Inuit community – they have an accordion tradition, but this is more likely to have been influenced by the whaling traders.