During my researches into the singing in King’s Lynn, I came across a newspaper report of a radio programme being recorded there (Lynn News, 8th July 1955), which was made by a team including the writer John Seymour (of “Self-Sufficiency” fame).

“HERE THEY ARE! Three of the saltiest of the “Old Salts” of the Tilden Smith. Nearest the camera is 89-year-old Charlie Fysh – fisherman all his life. Next to him is 70-year-old Tom Benefer and beside him, looking very much at peace with the world, is George Smith, who is also 70. You can’t teach ‘em anything about cockles, shrimps or singing – as a BBC recording team found on Monday. 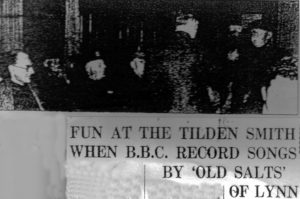 “IT NEARLY BROKE ME BRACES” was Charlie Fysh’s complaint when the picture on the left was taken at the Tilden Smith. The flash of the camera startled him and he had to start his rendering of “Ole Johnnie Bowker” all over again. Recording Charlie’s song is Francis Dillon, of the BBC, while John Seymour, the author of travel books who organised this feature for the BBC looks on (extreme left).”

Seymour himself describes his meeting with these singing fishermen in his 1956 book “Sailing through England”. 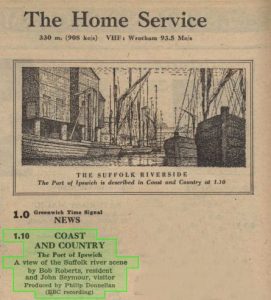 This has led me towards a re-evaluation of Seymour’s broadcasting and writing output in terms of his contribution to mid twentieth century folk music collecting.

He was good friends with the singer and sailor Bob Roberts and together they worked on some radio broadcasts in the 1950s when they were both living in Suffolk, such as this one listed in the Radio Times, 13 April 1958.