For years, I have been involved in keeping stepdancing going in East Anglia. Part of this entailed inheriting a competition from the previous organisers and making sure it was fit for purpose 2006-2017. In an idle moment I decided to investigate stepdancing competitions further back in time, through the British Newspaper Archive. I found a few references to my area through the late 19th century and early 20th century, but not many, so I widened the search terms. 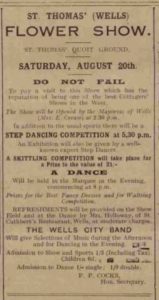 Then I landed on an absolute gem of a newspaper report detailing competitors, rules, audience numbers etc (too big to reproduce here). This has led to a wider investigation, focussing on Somerset in the first four decades of the twentieth century when there was something of a revival in stepdancing, which appears to have been supported by the local branch of the English Folk Dance Society.

There is a treasure trove of evidence to be found, not just amongst the newspaper reports, but also in the papers of the Friendly Societies, the famous folk music collector Cecil Sharp and Lady Florence Balfour Kettlewell. I am particularly indebted to Jacqueline Patten and Chris Metherell for their help and support. I have identified 17 competitions and 55 dancers in this period to date.

This is work in progress – some of it was presented at Sidmouth Folk Festival in 2019, but there is a lot to write up!