The Perfect Cure is often thought of as a quintessential Norfolk tune, one of  several jigs collected in the county that were played for the Long Dance. As so often, a little bit of musical archaeology reveals not only other regions that see the tune as being distinctively theirs, but also a glimpse of the way melodies moved between different performing contexts in an era before tunes tended to be pigeon-holed into different genres. The strength of the Norfolk connection comes from the fact that it was published by the English Folk Dance and Song Society: firstly in ‘The Coronation Country Dance Book’ in 1937, a year or so after it had been noted down from melodeon player Herbert Mallett of Aldborough by Joan Roe, and subsequently, probably with a longer lasting influence, in ‘The Fiddler’s Tune Book’ Vol 2 in 1954. 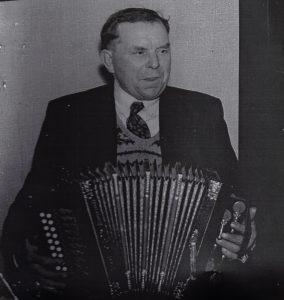 In July 1950, Herbert Mallett (left) visited the BBC studios in Norwich and recorded several items including The Perfect Cure. The Vaughan Williams Memorial Library holds the acetate recordings and this tune and others can be heard on the Musical Traditions website, in Chris Holderness’s article about Herbert Mallett.

Dulcimer player Billy Cooper from Hingham also played it, with a slightly different B music, which is given below, however it is Mallett’s version which has become the standard English version of the tune in modern times.

The Perfect Cure from the playing of Billy Cooper, Norfolk dulcimer player

It’s also known – usually as She Hadn’t The Thing She Thought She Had – in Sliabh Luachra in south west Ireland).  Some years ago, Con O’Drisceoil from County Cork was performing at a concert in Suffolk and introduced what he considered to be one of the more unusual items in his local repertoire, a 12/8 jig (known as a slide), which turned out to be – The Perfect Cure. I don’t know who was the more surprised, the audience or Con!

A set of words was noted down from the Oxfordshire fiddler Sam Bennett in 1950: 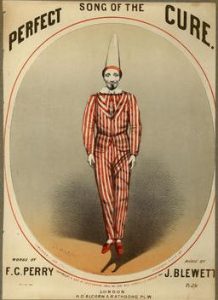 The phrase ‘perfect cure’ was a slang phrase, current from the mid nineteenth century, for an eccentric and amusing person. The original song dates from that period, and consisted of ten verses written in 1861 by F. C. Perry. The song was a roaring success in the Music Halls, made popular by James Hurst Stead, who, after the final verse, went straight into an early version of the punk pogo dance, where he is said to have jumped up and down 400 times during the song, and sometimes performed it in four different venues in the course of one night!

The actual melody, composed by John Blewett, predates this set of words, as it was originally written for a song called The Monkey and the Nuts. The original tune was written as a schottische although it is now commonly played as a jig. Prior to the folk revival, there were a number of such tunes (e.g. Woodland Flowers), usually referred to as barn dances, which were half-way between a jig and a schottische. They were popular for the Long Dance in Norfolk and Herbert Mallett played at least one other tune in this timing, the title and history of which remains to be identified.

There’s a lot more about James Stead on this blog about people buried in St Pancras and Islington cemetery by Bob Davenport, and more about the tune itself on the wonderful Traditional Tune Archive.

This work was first published in the East Anglian Traditional Music Trust newsletter in May 2011 and then on their website. I founded and ran EATMT from 2000-2017. The article has been slightly modified in 2019 in the light of further information. It forms part of an occasional series on this website called Tune Histories.

If you’re really interested in this aspect of traditional dance music, I recommend that you seek out Celia Pendlebury’s M Phil dissertation ‘Jigs, Reels and Hornpipes: A History of “Traditional’ Dance Tunes of Britain and Ireland’. You’ll find it online.

If you’d like to know more about Billy Cooper and East Anglian dulcimers, visit my other website East Anglian Dulcimers