Jackie Daly and Matt Cranitch are two of the foremost interpreters of Irish traditional music.

In November 2019, I became the UK agent for Jackie Daly and Matt Cranitch and looked forward to bringing them to more British audiences.

We had some  great events confirmed for 2020, which, of course, have had to be cancelled. We hope they can be re-arranged for 2021. 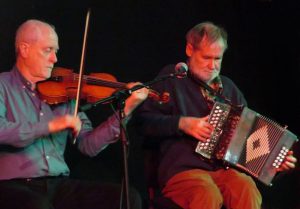 Together Jackie and Matt have introduced many people across the globe to the glorious and distinctive music of Sliabh Luachra, from Cork and Kerry in the south-west corner of Ireland which has a unique instrumental tradition rich in slides, polkas and slow airs.

They are regular visitors to the US and Newfoundland, with numerous appearances at the Catskills Irish Arts Week and the Feile Séamus Creagh, and have been featured artists twice for “Imagine Ireland”, the year-long celebration of Irish arts in the US.  Neither neglect their musical roots, maintaining strong commitments to several small-scale Sliabh Luachra festivals in Kerry and Cork particularly. However, even individual sightings in the UK have been few and far between, and in partnership, a real rarity.

Anyone interested in hearing the “pure drop” from two masterful and influential musicians who present their exquisite musicianship with humour and vitality, should arrange to see these two at the earliest opportunity!

Please email me (see contact page) to discuss available dates in the UK. 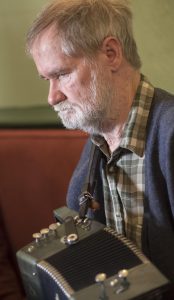 Jackie Daly: the words ‘button accordion’ and ‘Jackie Daly’ are synonymous in the world of Irish traditional music. Described in the New York Times as “probably the best accordionist in Ireland”, Jackie was born in Kanturk, Co. Cork, where he grew up surrounded by the rich traditions of Sliabh Luachra. Jackie was a central figure in some of the most prominent and influential groups in Irish music, including De Danann, Patrick Street and Buttons and Bows as well as partnerships with Séamus Creagh, Kevin Burke and others. He has toured extensively throughout the world, and has also presented workshops and classes. His hugely significant role in traditional music has been recognised by a number of awards, including the TG4 Gradam Ceoil  Award for Musician of the Year in 2005 and the Kanturk Arts Award in 2009. He is currently working on a book of his own musical compositions. 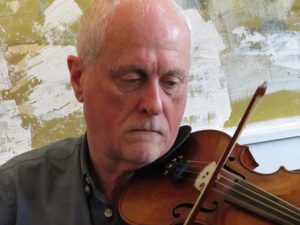 Matt Cranitch is renowned as a fiddle-player, teacher and lecturer, both at home in Ireland and abroad. He has performed extensively at concerts and festivals, on radio and television, and has presented lectures, master-classes and workshops on various aspects of Irish music. He may be best known to UK audiences through the groups he has performed with, including the iconic Na Fili, Any Old Time and Sliabh Notes. Author of The Irish Fiddle Book, first published in 1988 and now in its fourth edition, he has also contributed to other books on Irish traditional music. He is an authority on the music of Sliabh Luachra, and received a PhD from the University of Limerick for his study on the fiddle-playing tradition of the region. A long-time consultant for the Geantraí series on TG4, he is a former advisor to the Irish Arts Council scheme for the traditional arts, and has served on the board of the Irish Traditional Music Archive. In 2003, he received the Hall of Fame Award from University College Cork.

Both Matt and Jackie have been recent recipients of the Patrick O’Keeffe Traditional Music Festival Award for dedication to the music of Sliabh Luachra.

Further details including media information may be found on Matt’s website: www.mattcranitch.com/matt-jackie

There are also any number of clips on YouTube – here’s just one:

Hornpipes at the O’Flaherty Retreat (Texas), 2012