Sliabh Luachra (the rushy mountain) is a term used largely when describing the culture of east Kerry and north Cork, either side of the River Blackwater, in south-west Ireland. The area has a strong tradition of poetry and music-making, the latter with a distinctive rhythmic style and a repertoire heavy on polkas and slides (12/8 jigs). The music is closely related to that found in the adjoining areas of Múscrái and Chorca Dhuibhne, both of which still have significant Irish speaking communities.

This is without a doubt the music that I’m most passionate about these days. I think it’s to do with the sense of rootedness and connection with people as well as the wonderful spirit of the music itself. There’s a wide range of moods and enormous subtlety in the driving rhythms. It speaks to my soul and at the same time has a very physical appeal. Enough analysing, I just love it!

I’ve known it and loved it for almost as long as I’ve known and loved the music of my adopted home, East Anglia.

I moved to Suffolk in 1978, and not long afterwards I met Julia Clifford and her husband John who were living a few miles away in Thetford, Norfolk. I knew of their music through the Music from Sliabh Luachra article written by Alan Ward, editor of Traditional Music magazine in 1976 –even before I attended my first English Country Music Weekend. Then there was Jackie Daly’s intoxicating first album, released in 1977. My own first album of dance music, Mellophone – Old Hat Dance Band, 1991 – included tunes learned from Julia and also from Lucy Farr, the Galway-born fiddler from London, whom I met through mutual friend Reg Hall, with more tunes from Sliabh Luachra appearing on the Katie’s Quartet album (1996) and The Green ‘Un (2009). 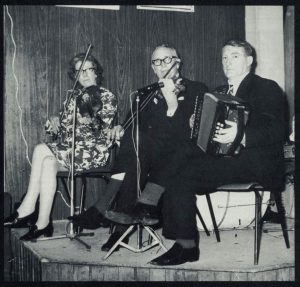 In the 90s I met the inimitable box player Johnny O’Leary (on the right) both in England and in Ireland, and visited Julia Clifford (on the left, with her brother Denis Murphy, centre) in her home to learn tunes, but after Julia died in 1997 there was a gap of some years where I didn’t get to hear much Sliabh Luachra music except on recordings. It coincided with a busy time professionally, where I set up first as a freelance music educator and then founded the East Anglian Traditional Music Trust, so my musical focus was very much on my own local traditions.

Then I got an email, via EATMT, asking if I knew of any Irish fiddlers locally, with the final line: ‘P.S. I play Sliabh Luachra music’ with an explanation of what that is. I didn’t need the explanation and I didn’t need any second thoughts – I got straight back to the writer who turned out to be Michael Sheehy, a wonderful musician with family roots in west Limerick. His father had moved from there to Manchester, and finding few other musicians there with common interest, he taught Michael many tunes and with it a great laidback and yet driving style. Michael lives a few miles from me and we have had some great times playing t 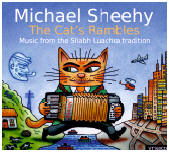 ogether locally, at festivals and over in Ireland too.

Michael is a talented illustrator with a catalogue of high profile and memorable work – have a look at his website – and his solo album!

In the course of visiting Ireland a lot over the last thirty or so years, I have got to know  many musicians and have shared some great sessions with a good dose of shlides and polkas in them. As of 1st November 2019, I am pleased to be acting as UK agent for Jackie Daly (whose album made such a big impression on me 40 years ago) and Matt Cranitch. Please see my agency page for further details.

Video clip:  April 2017,  a session at the Maurice O’Keeffe festival in Kishkeam: The Ballydesmond Polkas. If I look a little uncomfortable it’s because I’d just found out Jackie Daly couldn’t get there and I was sitting in what would have been his seat!

Any Sliabh Luachra music fans in reach of Stowmarket, Suffolk, do get in touch and I can let you know dates for our sessions – usually monthly on a Thursday – hopefully to be resumed in 2021!

I am now acting as UK agent for Jackie Daly and Matt Cranitch.

We did have some dates confirmed for 2020,  and are hoping these can be rearranged for 2021.