Research into folk song, music and dance, has long been a passion. Over the years it has taken different forms and focused on different aspects, but the stories and people behind the tunes and songs have fascinated me as much as the material itself. During lockdowns in 2020 and 2021 I decided to take the publication side of it more seriously and created a new website for some of my writing. This provided an opportunity to revisit and update some of my ‘back catalogue’ as well as work on some new subjects.

My research is now published in various places: 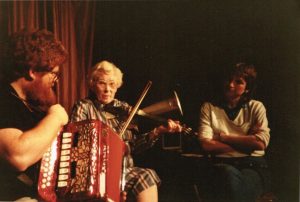 Julia Clifford (1914-1997), fiddle player from Lisheen in Co. Kerry, lived in Thetford, Norfolk for the last twenty years of her life. Julia came from a musical family and recordings made in the 1970s brought her music to wider attention across Ireland and England. Julia had lived in London since the 1940s, but shortly after the recordings came out, she and her husband John (also a musician) moved to Norfolk, and as far as publically available information goes, they all but disappear from view. However, this period, and especially after 1981 when John died, saw a busy period of music-making for Julia, with a younger generation of enthusiasts and a new audience on the English folk scene. In 2019 myself and a group of friends who had known her in the east of England decided to celebrate her musical talents and legacy in a one-off event called ‘I Looked East and I Looked West’, held in Suffolk. The photographic exhibition created for the festival may be accessed here: The Julia Clifford Project or from the top menu. There’s also some information about Julia’s music on my Sliabh Luachra page and links to further resources. And in 2022 we are planning for a permanent memorial to Julia in her homeplace in County Kerry.

The photo shows Julia playing in 1987, with friends from Suffolk Michael and Caroline Kilbane, courtesy of Pete Cooper.

For the last twenty years I have been researching the early twentieth century folksong collectors in the eastern counties, and in particular, the singers (fishermen, farmworkers) they collected from. Some of my findings were originally published on the East Anglian Traditional Music Trust’s website,  but I have now revised and updated all this work and published it here on this website:  King’s Lynn singers in 1905  (which is just part of a much wider study of singing in the town) South Norfolk singers in 1911 (folksongs collected by Ralph Vaughan Williams and George Butterworth, near Diss) and ‘Southwold singers in 1910’ featuring the legendary (but real) Ben Hurr!  These writings supersede earlier versions which may still be found on the EATMT website and contain some inaccuracies.

I am in the process of migrating these articles to the Unsung Histories website.

A Barrel Organ in the Arctic An investigation into the barrel-organ taken onboard Captain William Edward Parry’s Arctic Expeditions in 1819-1825, which contained early recordings of popular dance tunes, many of which are still known today. Dancing and marching to the music on the barrel organ helped to keep the officers and crew fit and interested during the long winter months when the ships were icebound searching for the North West Passage.

Tune histories  In this section are published a few contributions to the growing data and interest in the history behind our ‘traditional’ dance tunes. I began looking into these in the early 2000s, when preparing the book ‘Before the Night Was Out’ about tunes played in Suffolk and Norfolk. These stories show the tenacity of a good melody and its ability to transcend social contexts and class across decades and even centuries.

Will the real Paddy O’Rafferty please stand up! The song, tune, dance and stage character Paddy O’Rafferty and his travels across the Irish Sea and the Atlantic. This was one of the tunes on Parry’s barrel organ.

Miss Gayton’s Hornpipe The far reaching story of one tune and dance across two centuries, and one young dancer’s rise to fame and sudden disappearance from the stage – in two parts, one about the tune and one about the woman who inspired it, stage dancer Esther Gayton. Another tune from Parry’s barrel organ.

The Perfect Cure & Starry Night for a Ramble – two quintessentially Norfolk tunes … or are they? 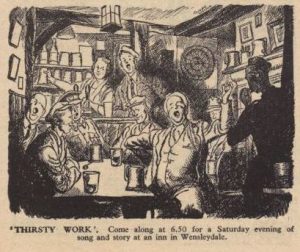 Radio histories In 2021 , looking for something inthe BBC Radio Times online archive, I stumbled across a major BBC radio series dating from 1940-41, called “Thirsty Work” which broadcast songs direct from pubs across England. This has become a major piece of work and there are now four articles about it. It’s significant because it predates the better-known series such as “As I Roved Out” by a number of years, and presented folksong without the “benefits” of piano accompaniment and evening dress! Exciting stuff!

Norfolk histories A whole series on the singing tradition in King’s Lynn, incorporating recordings made in the 1950s and 60s, as well as a whole new article on a songbook dating from the 1870s. This will eventually include all my research on Vaughan Williams in King’s Lynn as well, and also from South Norfolk. Also: The Well Travelled Dulcimer How a Norfolk dulcimer crossed the Atlantic during WW1

Suffolk histories A whole series of articles about the singing tradition in Southwold, with much about the Hurr family from the 1900s, as well as new articles on artists’ representations of the singing and fishing community and an “unsung” song about the Battle of Sole Bay. This will eventually include all my research on Vaughan Williams in Southwold as well. 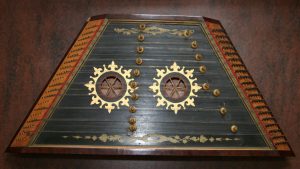 My husband John Howson and I have researched this subject for over forty years and have amassed so much information that we have built an entire website devoted to the history of the East Anglian dulcimer, its makers and players:  www.eastangliandulcimers.org.uk

Two Hundred Year Old Tunes from Bury St Edmunds Based on a booklet of 24 Country Dances published in 1812 and including original research as well as transcriptions of the tunes. Very hard to find, and a little gem, so here’s a direct link. The article (written by me a decade ago) includes an excerpt from my unpublished dissertation, ‘Dancing in Suffolk 1750-1900’ (1995).

Two Singers from the Stour Valley

Behind the Song – Peter the Paynter and The Captain’s Apprentice

Ralph Vaughan Williams in the East – with case studies on King’s Lynn (‘North End Voices’), Southwold (‘Blyth Voices’) and South Norfolk, written by me several years ago. Please note that all these articles on the EATMT website are superseded by updated versions published either here on my Unsung Histories website (see above). Unfortunately some inaccuracies persist on the EATMT website.

Details of my other writings on the EATMT website are listed on the Publications page.

The history of dancing jig dolls This culminated in a book “The Brightest of Entertainers” co-written with Pat Pickles, published in 2018 and short-listed for The Katharine Briggs Award in 2019 by The Folklore Society. (See Publications page).

I’m a member of the Instep Research Team, which has a website full of information about stepdancing from across the British Isles.