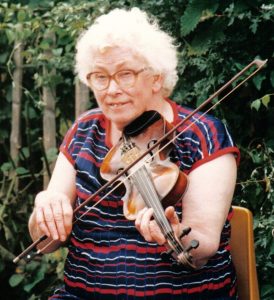 Welcome to the home page for ‘I Looked East and I Looked West’ – a celebration of the life and music of Julia Clifford.

In 2019, myself and a group of friends who had all known Julia when she lived in East Anglia, organised a one-off celebratory festival in Stowmarket, Suffolk, UK over the weekend of 26th-28th April. We hoped this event would bring together those who knew Julia in Ireland, London and East Anglia, as well as many musicians who were influenced and inspired by her playing, and it’s fair to say it exceeded everyone’s expectations!

As part of that event, I put together an exhibition of photographs and ephemera, which we hoped to take over to Ireland in 2020. However, with the global pandemic, this is clearly not going to happen for a while, so it seemed a good idea to put the contents of the exhibition here on the website. I still hope to take the physical exhibition to the communities in Kerry around Julia’s homeplace in the future, and tell some of the stories behind the pictures in a presentation. The photographs are organised into five albums and there is also a brief biography with links to recordings, obituaries and other ephemera. You can access these from the drop-down menu or the square icons at the foot of each page.

If you have any further information about any of the photographs, please do get in touch and let me know, and if you would like to contribute any photos or items to the exhibition, I’d love to hear from you!

Who was Julia Clifford?

Julia, née Murphy (1914-1997), was a wonderful fiddle player born into a musical family in Lisheen, Co. Kerry, in an area known as Sliabh Luachra (the rushy mountains), renowned for its poets and traditional musicians. Through seminal recordings made in the 1970s, Julia and her brother Denis Murphy helped define what is now a well-known genre of Irish traditional music.

Julia and her husband John Clifford, also a musician, had been living in London since the 1940s, but shortly after the recordings came out in the late 1970s, they moved to Thetford in Norfolk, and as far as publically available information goes, they all but disappear from view. However, this period, and especially after 1981 when John died, was actually a busy period of music-making for Julia, with a younger generation of enthusiasts and a new audience on the English folk scene.

For a fuller biography, follow the links at the bottom of this page.

New sources since the event:

The RTÉ radio programme ‘The Rolling Wave’ broadcast two programmes dedicated to Julia Clifford during 2020. The first of the two programmes,  about the making of the album ‘The Star Above the Garter’ album  is here, and the second programme, which includes an interview with me talking about her life in England, is here.

In 1984, Linda Crisp interviewed and recorded Julia at her home in Norfolk , with lots of lovely musical clips. Her son has recently digitised it and made into a presentation with visuals,  and you can now listen to it here: Julia Clifford: The Surviving Tradition Of The Kerry Fiddler

Michael and Caroline Kilbane knew Julia very well and also recorded her comprehensively in the 1980s. This event precipitated us meeting up again after thirty years and stimulated them into action on a much cherished idea. They have recently put together a wonderful personal collection of her music, recordings and scores on a new website: The Music of Julia Clifford.

Huge thanks are due to all who helped in anyway, and I apologise to those I have inevitably missed off this list.

Photograph albums – click on an icon below, which will take you through to a gallery of photos, each of which can be enlarged to view individually. We have watermarked many of the images, as they do not belong to us, and a few are copyright to professional photographers. If you would like to use any of the images, please get in touch. It’s a good idea to start with the biography page.