Old Hat is a complicated beast which has had several incarnations since 1980.

In 1982 the core of Katie, John and Reg put together a travelling group of traditional musicians, singers and stepdancers under the name Old Hat Concert Party.

The group performed at many festivals and clubs including the National Folk Festival, Sidmouth and Whitby Folk Weeks, Bracknell Folk Festival and Gateshead Garden Festival and continued until about 2007, when they were invited to the Keith Summers Weekend in central London. Barry Callaghan wrote this in a review of the Old Hat Concert Party CD in 2000:

‘The Old Hat label, together with Veteran, Vintage and other associated labels have of course gone on to develop a formidable catalogue of traditional and revival titles, and to a certain extent this CD may seem a relatively minor contribution.  Where I think it is important, however, is as a showpiece for a truly remarkable and enduring piece of participant research, carried out with total respect and support for the musicians of the area, and which, among other things, brought a great deal of happiness to a considerable number of people later in their lives.’

In 1986, the Concert Party was booked at Whitby Folk Week in Yorkshire and Barry Coope played piano with them, then the following year, Katie & John met up with Chris Wood during Sidmouth Folk Festival in Devon and the three were looking for a quiet pub to have a few tunes in (they found the Volunteer, but that’s another story!) … this went well enough for them to decide to form a new band, thus was the Old Hat Dance Band born. Other members were Reg Reader, Ted Stevens (percussion) and Mel Dean (concertina). Ted and Mel had played with Katie and John in the ill-named band  Women Wrestling in Mud in the early 1980s, and some of us (!) were quite glad to ditch that particular name. The Old Hat Dance Band was invited to Glastonbury Festival (our claim to fame – we turned it down!), did a live gig on Andy Kershaw’s Radio 1 show and nearly made it to be the album of the month in hipster magazine Blue Juice. Concertina player Mel Dean died in 1996 and the band did the occasional booking until about 1999. 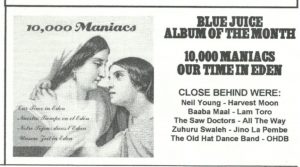 A later reincarnation was just Old Hat, which consisted of Katie, John, Reg, Jeannie Harris and Adrian Turner from the original 1980 line-up, Rob Neal from Katie’s Quartet on cello and piano and Simon Ritchie on mouthorgan and percussion. We did a few gigs and festivals together including a memorable Sidmouth Festival in 2004, with a younger generation including Tom Knight on dulcimer.

After 2007, myself, John and Reg occasionally went out as the Old Hat Trio and in 2017, Tom Knight took the place of his grandfather Reg Reader (who died in 2014) and we did a couple of gigs as the New Hat Trio.

Another branch of Old Hat Music was the legendary Old Hat Music Nights, held in various pubs from the late 1980s until about 1999, featuring many, many local traditional performers together with guests from further afield such as Jim & Lynette Eldon, Will Noble & John Cocking, Peta Webb & Ken Hall, Bob Davenport, Bampton Morris and Lucy Farr and the Rakes, sometimes quite unannounced!

Lots of memorabilia on the Old Hat Archive page. You might be gone some time …!

To find out about my current bands, have a look at my Bands page.