I started off on a one-row melodeon in the key of C and I still play one, albeit rather better quality than the first beat-up old box. I also play two-row diatonic accordion (D/G and occasionally C/F) and have recently been challenging myself with the C#/D system for Sliabh Luachra music.

D/G two row – made by Eric Martin in 1993. ‘The Green ‘Un’ – bought in 2009 off my friend Fiona Frank to whom I am eternally gratefully for giving me the opportunity to own this heart-stopping music maker. I played one note and fell in love.

D/G two-and-a-half row – a Hohner Club IIM. Such a nice instrument that I bought it twice! I sold it when I needed the money and then bought it back off Diane Richardson just as she needed to sell it.

D one-row – an old ‘Winner’ rebuilt by Emmanuel Pariselle. Gorgeous action and sound after the maestro Manu took it into his head to refurbish it for me. A little gem.

C/F two row – a Hohner ‘pokerwork’ – although someone has removed the pretty black and gold finish. Sweet instrument.

C#/D two row – an old Hohner Erica, originally in D/A and refettled by Rees Wesson. It’s a challenge to the brain cells and motor coordination, but that’s no bad thing.

I also play mouthorgan and have a range of 32 hole tremelo harmonicas in various keys, which are nearly all Tombo Deluxe 21 models apart from a low Suzuki Humming model in D. 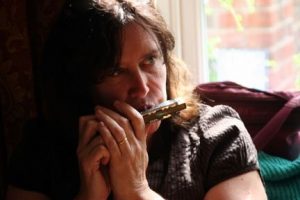