Here are the bands I am in or have been in: an asterisk denotes an album.

Valiant Dance Band (2014 -) with Roger Digby (concertina), Liz Giddings (fiddle), John Howson (banjo & guitar) and Rob Neal (cello). Gutsy music for dancing to or listening to from some of the best English traditional musicians around.

Past bands in chronological order

See the Old Hat  page on this website for more detail on this family of bands.

Katie Howson & Jeannie Harris * (1994 – 2012) A duo exploring our East Anglian roots plus quirky music from around the English and Irish diaspora. 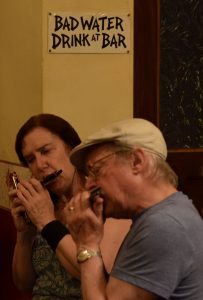 The Four Stops (sometime in the distant past + 2017/8) Four one-row melodeon players, what could possibly go wrong? If you think we’d be playing ‘Reach out, I’ll be there’ you’d have another think coming! The most recent embodiment of this idea was in February 2018, with Rees Wesson, Tony Wetherall and Steve Dumpleton. Previous four-stoppers have included Jeannie Harris, Dan Quinn and Will Duke. To be continued …

Bayou Seco Big Band (various, including Sidmouth Folk Festival 2003) We first met Jeannie McLerie and Ken Keppeler in 1993 and have kept up a long-distance friendship ever since. Their roots are deep in the southwest of the USA, where they have collected music from older traditional American musicians (including Hispanic, Cowboy, and Tohono O’Odham musicians in New Mexico and Arizona) and learned to play many of their tunes and songs.

Then there were the party bands put together for one-off daft events at Wilderhope,  Bockleton and Sidmouth Drill Hall: Pearl and the Twinsets, The Bockleton Pocket Band, The Dinner Ladies …

One or two other bands came and went over the years, but these are the ones that kept going or recorded albums: an asterisk denotes an album.

See my Discography page for details about the albums.