This information is updated from the original written as part of the Blyth Valley Voices project in 2003, and picks up the story of traditional singing and music-making in the town of Southwold on the Suffolk coast from the visit in 1910 of folksong collectors and composers Ralph Vaughan Williams and George Butterworth. You can read my latest writing about that trip and the early twentieth century singers including Ben Hurr (!) here.

In the mid twentieth century, singing and music-making carried on in the Southwold Arms, the Nelson and the Harbour Inn.

In the Southwold Arms in the High Street, after a darts match on a Friday or Saturday evening, and also on away matches, Frank Palmer and others including Graham Lewis and some Hurr cousins of Frank’s would enjoy a singsong with old favourites such as The Faithful Sailor Boy, The Miner’s Dream of Home  and The Rugged Cross alongside more recent songs such as The Happy Wanderer or Red Sails in the Sunset. Comic songs such What a Wonderful Fish the Sole Is, or Albert & Sadie (a parody of Frankie and Johnny) were always popular, with the audience joining in lustily.

At weekends in the Harbour Inn, down on the banks of the River Blyth during the nineteen fifties you might have been lucky enough to catch Ernie Seaman over from Darsham playing polkas, hornpipes and some old-time songs on the melodeon. Guy Barber, a Southwoldian who worked on the fishing fleet out of Lowestoft, also played the melodeon there on occasions and sang popular songs such as The Volunteer Organist. 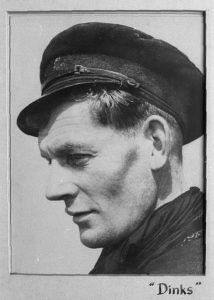 Another night you might hear some songs from ‘Dinks’ Cooper whose best known song was Busky, Haul the Trawl. Dinks was a celebrated character about whom many stories are told, including how he got marooned, together with Ernie Seaman and a couple of others, for several days upstairs in the Harbour Inn during the great floods of 1953 with only twenty Woodbines (cigarettes) for sustenance, and how he fell asleep at the tiller of his boat and passed under the pier unharmed. In another of Dinks’ favoured pubs, the Bell in his home village of Walberswick, a brass plaque can be seen on the wall proclaiming ‘Dinks’ leaning post’.

Other performers in the Harbour Inn from those days were recalled by John Winter, well known in the town for his many activities in connection with the Sailor’s Reading Room, the Town Council, and as a singer and jazz musician. His father, Jimmy ‘Dusso’ Winter used to sing Four and Nine, with ‘Tinny’ Townsend playing the piano, and John also recalled Willy ‘Jarvo’ Jarvis singing Lovely Nancy (Pleasant and Delightful) in there. John (also known as ‘Dusso’ after his father’s death) also remembered singing in the Nelson, where, ‘in the nineteen seventies a group of us used to get together on Sunday evenings and have a good old sing, that was when Eric Woods was the landlord.’ One of John’s party pieces was The Captain Told the Mate, which he first heard from Willy Jarvis. John can be heard singing this on the Veteran CD “When the Wind Blows”.

Other singers recalled by John Winter were two men he worked with as a young man, who would sing ‘all day long’. One was Billy Welton, then in his seventies, one of whose songs went: ‘We parted on the shore / As the crowd began to roar / eeley-o, eeley-o, we’re off to Baltimore’.  The other was a retired drifter skipper called Jack Remblance, of whom John remarked: ‘Although his singing was awful, the songs he knew were, to say the least, different, such as the The Shoreham Murder, which Jack warned me never to try and sing in Shoreham!’

John also recalled the old boys of his youth talking about who sung what in the Red Lion on South Green. This was evidently a popular singing pub earlier in the twentieth century.

John Winter died in January 2019 and there’s a great tribute to him here: 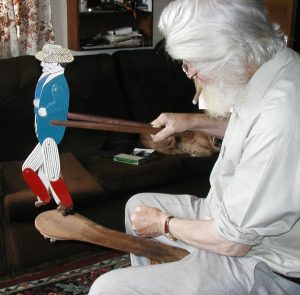 John Barber, another well-known figure in the town, dressed in his civic regalia as the Town Bellman, is also a singer and musician. His favourites include The Northern Lights of Old Aberdeen which he recalls his father Guy singing (and which was one of Frank Palmer’s favourites too) John also played the melodeon and the mouth-organ, and spent many years playing music in the company of George Jackson and John ‘Wiggy’ Goldsmith, popular entertainers at pubs and parties in the area. John has been particularly keen to encourage youngsters to keep the music going locally and taught his grandson, Alex Goldsmith, to play the melodeon, as well as playing a crucial part in re-establishing the band tradition in the town with the foundation of the Southwold & Reydon Corps of Drums in 1981.  Alex has gone on to be a very fine musician and has worked across the world, though still iving and playing locally. John is also known for his unusual and distinctive ‘jig dolls’, which he made from a design he remembered from his youth, when an old man in Victoria Street in the 1940s used to sit in his doorway and dance similar ones on a board. Another old character in Church Street used to play the dulcimer in his doorway, whilst sporting an enamel plate on his head, to protect himself from shrapnel! John, ever inventive, has improved the design of the jig dolls by adding bells underneath the board, and his own trade-mark cigar in the mouth of one of them!

In more recent times, the Harbour Inn has been a regular haunt of local folk singers and musicians, and the Sole Bay Inn and both the Walberswick pubs, The Bell and the Anchor, host occasional music sessions. These days you are likely to find people from Norwich or Beccles or even further afield participating in these informal get-togethers, but locals such as John Barber and John Winter link the traditions of the present with those of the past.